The best things in life are nearest:


Breath in your nostrils,


light in your eyes,


flowers at your feet,


duties at your hand,


the path of right just before you.


Then do not grasp at the stars,


but do life's plain, common work


certain that daily duties and daily bread are the sweetest things in life. 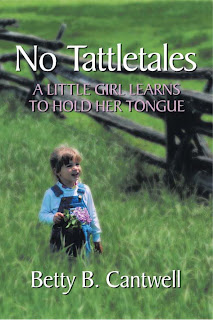 This month we are celebrating my Mom's first book!
After teaching Art for many years at the local High School, my mom retired to travel and write.  Her stories have been published in Christian Woman Magazine and Guidepost Books. Set in rural Arkansas in the 1880's, No Tattletales is especially significant to our family because it is based on the life of my great grandmother, Mary Jane James, and on stories passed down through our family for generations. 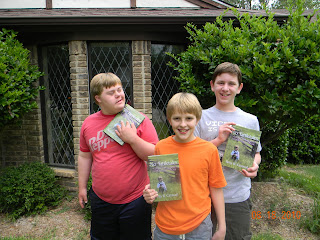 Some of the privileged few who have managed to acquire an early copy of this coveted historical novel. You can get your copy of  No Tattletales  from Barnes & Noble, Amazon.com or AuthorHouse.com.
Posted by Susan at 4:31 PM 2 comments:

At 18 months I enrolled my first born in swimming lessons, when number two came along she was jumping into the shallow end of a pool by the time she could walk.  Number three, my fearless dare devil, would catapult himself off of the diving board into the deep end and he was still wearing swimming diapers.  When the kids were little I worried about their safety around water.  Because of that fear, I made sure they could swim before they were even potty trained.  It gave me some peace of mind, yet they never swam unless they were supervised by an adult.  Years have passed since my first toddler-in-the-water-anxiety attacks.  Water sports have turned out to be a way of life for the younger two, who both swim competitively and are doing quite well.  I came across this article and decided to re post it here.  We have swim meets for the next three weekends, prayers for each to do their best would be appreciated!

Drowning Doesn’t Look Like Drowning
by Mario Vittone on May 18, 2010

The new captain jumped from the cockpit, fully dressed, and sprinted through the water. A former lifeguard, he kept his eyes on his victim as he headed straight for the owners who were swimming between their anchored sportfisher and the beach. “I think he thinks you’re drowning,” the husband said to his wife. They had been splashing each other and she had screamed but now they were just standing, neck-deep on the sand bar. “We’re fine, what is he doing?” she asked, a little annoyed. “We’re fine!” the husband yelled, waving him off, but his captain kept swimming hard. ”Move!” he barked as he sprinted between the stunned owners. Directly behind them, not ten feet away, their nine-year-old daughter was drowning. Safely above the surface in the arms of the captain, she burst into tears, “Daddy!”
How did this captain know – from fifty feet away – what the father couldn’t recognize from just ten? Drowning is not the violent, splashing, call for help that most people expect. The captain was trained to recognize drowning by experts and years of experience. The father, on the other hand, had learned what drowning looks like by watching television. If you spend time on or near the water (hint: that’s all of us) then you should make sure that you and your crew knows what to look for whenever people enter the water. Until she cried a tearful, “Daddy,” she hadn’t made a sound. As a former Coast Guard rescue swimmer, I wasn’t surprised at all by this story. Drowning is almost always a deceptively quiet event. The waving, splashing, and yelling that dramatic conditioning (television) prepares us to look for, is rarely seen in real life.

The Instinctive Drowning Response – so named by Francesco A. Pia, Ph.D., is what people do to avoid actual or perceived suffocation in the water. And it does not look like most people expect. There is very little splashing, no waving, and no yelling or calls for help of any kind. To get an idea of just how quiet and undramatic from the surface drowning can be, consider this: It is the number two cause of accidental death in children, age 15 and under (just behind vehicle accidents) – of the approximately 750 children who will drown next year, about 375 of them will do so within 25 yards of a parent or other adult. In ten percent of those drownings, the adult will actually watch them do it, having no idea it is happening (source: CDC). Drowning does not look like drowning – Dr. Pia, in an article in the Coast Guard’s On Scene Magazine, described the instinctive drowning response like this:

Except in rare circumstances, drowning people are physiologically unable to call out for help. The respiratory system was designed for breathing. Speech is the secondary or overlaid function. Breathing must be fulfilled, before speech occurs.

Throughout the Instinctive Drowning Response, drowning people cannot voluntarily control their arm movements. Physiologically, drowning people who are struggling on the surface of the water cannot stop drowning and perform voluntary movements such as waving for help, moving toward a rescuer, or reaching out for a piece of rescue equipment.

From beginning to end of the Instinctive Drowning Response people’s bodies remain upright in the water, with no evidence of a supporting kick. Unless rescued by a trained lifeguard, these drowning people can only struggle on the surface of the water from 20 to 60 seconds before submersion occurs.

(Source: On Scene Magazine: Fall 2006 (page 14))
This doesn’t mean that a person that is yelling for help and thrashing isn’t in real trouble – they are experiencing aquatic distress. Not always present before the instinctive drowning response, aquatic distress doesn’t last long – but unlike true drowning, these victims can still assist in their own rescue. They can grab lifelines, throw rings, etc.

Look for these other signs of drowning when persons are in the water:
Head low in the water, mouth at water level

Head tilted back with mouth open

Hair over forehead or eyes

Trying to swim in a particular direction but not making headway

Trying to roll over on the back

Ladder climb, rarely out of the water.

So if a crew member falls overboard and everything looks OK – don’t be too sure. Sometimes the most common indication that someone is drowning is that they don’t look like they’re drowning. They may just look like they are treading water and looking up at the deck. One way to be sure? Ask them, “Are you alright?” If they can answer at all – they probably are. If they return a blank stare, you may have less than 30 seconds to get to them. And parents – children playing in the water make noise. When they get quiet, you get to them and find out why.
Posted by Susan at 10:53 PM No comments:

Is It Summer Yet? 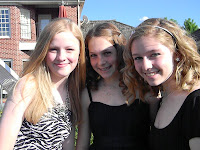 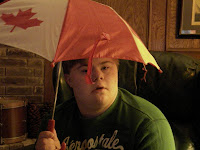 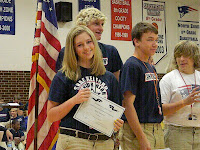 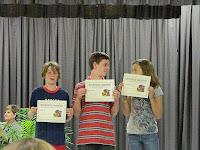 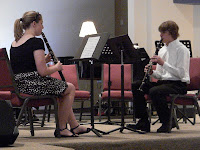 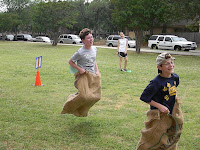 Each year the end of school activities usher in the beginning of summer fun. We have competed in Special Olympics, Field Day, Clarinet Recitals, Violin and Band concerts, multiple awards ceremonies and year end dances. Summer is officially here and Jack is expecting rain!
Posted by Susan at 10:52 PM No comments:

When did it become cool to be a nerd?

My daughter and her friends went to one of those new fangled 3D movies.  Instead of tossing the 3D glasses in the recycle bin on the way out of the theater, they poked the lenses out and put the frames on, laughing all the way out to the car as they pretended to be hard core nerds.  What's even more curious is, they hung on to these black plastic spectacles and pulled them out of the dark recesses of their junk drawers in order to relive the nerd experience at a restaurant, months later. 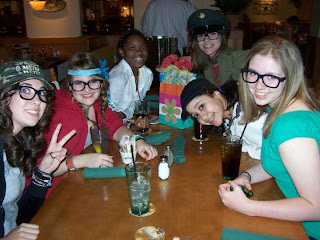 Donning the nerd glasses has been so much fun that my daughter has even embellished her pair with lime green duct tape. 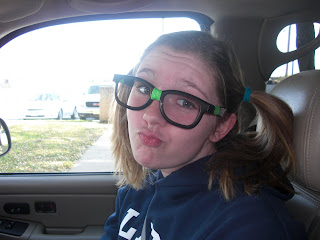 As a teenager, I do not remember being so self assured that I would go out in public to purposefully draw undue attention to myself wearing goofy anythings.  I'm glad my daughter and her friends are confident enough to have fun and do goofy things at this age, instead of worrying about what people think of them.  They must be truly "cool", in a nerd way...but what do I know, I'm old and I'm a real nerd.

The State of the Union 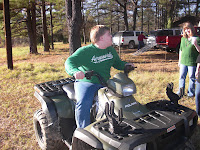 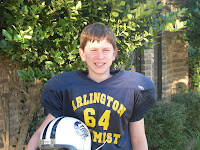 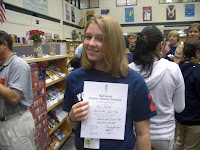 As I look back on 2009 I am greatful for all we have.  Our oldest started High School this year and the transition was not difficult at all.  I am glad that he does not really drive a car, that would be scary, but it is fun to see him sit behind the wheel of this 4-wheeler! The smart, pretty one was inducted into the National Junior Honor Society and we are proud of her.  She made the volleyball and basketball team at her school again this year and is continuing to swim on the swim team.  In addition she plays in the school band and has kept the 1st chair clarinet spot so far (knock on wood).  She does not realize how smart and talented she is and she makes it all look so easy. Our youngest, the talker of the family, finished his second year on the football team and was proud to wear the green stripe (only the biggest boys get the green stripe). His position is offensive left tackle.  He plays the violin in the Orchestra at his school, but has informed us that he does not want to do that again next year.  I accentuate the word "that" because when he says it, he says it with disgust as if he is spitting out some bad tasting medicine. He also swims on the swim team and plays on a basketball team.  All in all, it has been a good year. We are thankful for our family, our friends, our home, our health and the fact we have a job!
Posted by Susan at 1:50 PM 1 comment:

What's been going on here!

If it weren't for nagging prodding relatives, you know who you are, then this blog would not be updated today. I am shamed into rejoining the world of blogging, since my long hiatus from this time consuming endeavor. Blogging wouldn't be so bad if I didn't take so long to do it. What inevitably happens is, I do my update and then check on all my blogging friends. That's what takes so long. Before you know it, the day has flown by, the laundry and dishes have piled up and then hubs comes home from work, looks around and says..."So, what have you been doing all day?"  "Paperwork", I say and smile.

The kids are growing and busy. We spent this past weekend at a Cub Scout Pinewood Derby, All City Band rehersals(and a lunch break with friends) followed by a swim meet.  The pace never slows down and we all enjoy it like that.  Nite all! 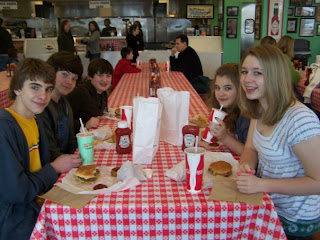 Trust in the Lord with all your heart and lean not on you own understanding; In all your ways acknowledge him, and he will make your paths straight. Proverbs 3: 5-6

Susan
Child of God, Wife, Mom "clothed with strength and dignity, she can laugh at the days to come." Proverbs 31:25

Books I enjoy and recommend

Add Snippets to your site